Holiday Foods And Gifts That Pose Hazards For Family Pets

By lakeviewadmin December 19, 2014 Blog
No Comments

With the holidays approaching, pet owners should take precautions so that the holiday festivities are happy and healthy for the four-legged family members, as well as the humans who love them.

2. Raisins and Grapes. These contain an as-yet-unidentified toxin that can cause acute kidney failure in susceptible pets. Although not all dogs and cats who eat raisins and grapes develop life-threatening kidney failure, amounts as little as 0.22 ounces of raisins per pound of the pet’s body weight or 1.4 ounces of grapes per pound of body weight can cause toxicity. For a 10-pound dog, that would be just over two ounces of raisins or 14 ounces of grapes.

3. Mistletoe, holly, Christmas rose and lilies. Mistletoe can be very toxic and even fatal if ingested by pets. Holly is considered moderately toxic, with vomiting and diarrhea most often seen in a pet who has ingested a small amount. When a large amount is ingested, holly can be fatal. The Christmas rose is moderately toxic, with vomiting and diarrhea most often seen. Lilies are potentially fatal to cats, as they can cause acute kidney failure. Any lily – Stargazer, Asian, Easter, Tiger and some day lilies can be fatal to cats. In fact, even the pollen from lilies can be hazardous to cats and kittens.

While many pet owners think that poinsettias are poisonous to cats and dogs, this favorite holiday plant most often only causes stomach and intestinal irritation, with vomiting and diarrhea.

4. Tinsel, ribbon and string. Cats in particular are attracted to the shiny tinsel, ribbons and string that adorn holiday trees and packages. However, these can be deadly if swallowed. These objects often become wrapped around the cat’s tongue and are swallowed. When they enter the intestines, they can cause the intestines to perforate, often with deadly results for the cat. Cats with these foreign bodies can have several signs: They may vomit, not eat, try unsuccessfully to defecate and become very lethargic. Cat owners who see their cats trying to defecate a piece of tinsel or string should not pull on it, as serious consequences can develop. 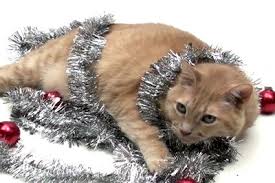 5. Toy parts. Dogs in particular are prone to picking up and eating small toy parts that are left strewn around the house. These parts often are too large to be defecated and can cause life-threatening intestinal obstructions. It’s not uncommon for an animal hospital to see one or two dogs each holiday season who have eaten part of a child’s toy and must undergo surgery to remove it.

Pet owners who believe that their pets have either eaten a potentially toxic food or plant, or have swallowed a foreign object seek help immediately. Although everyone is busy throughout the holidays, a delay of even a few hours may be the difference between a pet’s life or death.

Pet owners should refrain from using remedies and treatments that are suggested by friends, neighbors and many internet websites. There is no substitute for a thorough examination and evaluation by a veterinarian who is trained to diagnose and treat poisonings and other emergency problems in dogs and cats.

Pet owners who have emergencies with their animals after hours are referred to Mississauga Oakville Veterinary Emergency Hospital, 2285 Bristol Circle, Oakville (QEW and Winston Churchill area) 905-829-9444

*adapted from material on the Veterinary Information Network